Published by: Words of Passion 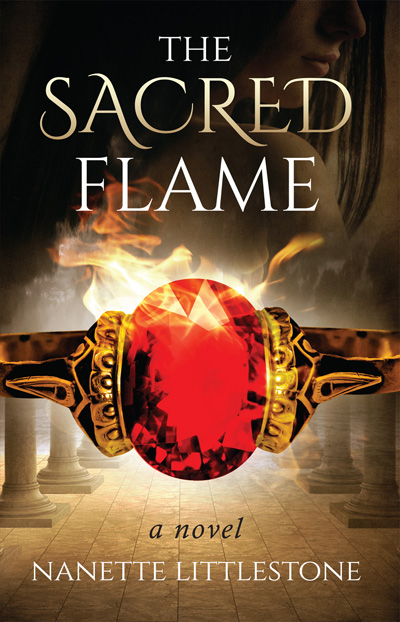 A reluctant Virgin. A married man on the verge of divorce. A cunning wife who will stop at nothing to protect her home.

The fate of an empire lies within their hands.

For thirty years, Livia has served Rome as a priestess to the goddess Vesta, guarding the temple's sacred flame. All she wants is retirement, a happy marriage, and peace. Instead, the High Priestess falls ill, Livia assumes leadership, and all her dreams collapse.

While the temple flame burns, no harm will come to the city. But against her vows, Livia falls for Gaius, a married equestrian, who wants to shower her with love. Passion awakens a burning desire and Livia's role as High Priestess falters. And Gaius's wife will stop at nothing to keep her marriage intact.

As summer comes, Rome is threatened by the invasion of Hannibal and Livia must choose between duty or passion. A choice that might cost her everything.

Get swept away in this ‘story of forbidden passion that unfolds against an immersive historical setting.’

A carefully woven historical epic with rich settings, depth of emotion, and the constant threat of tragedy that will reel you in and leave you breathless in the end.

Rich portrayal of setting and culture, with characters who are real and relatable.

Littlestone has brought characters to life out of marble and shown us their surprising realism. For what can be more real than love and the relentless quest to have it, damn the consequences.

The author's research immerses the reader in the culture of Rome and its Vestal Virgins while the book's plot captures the imagination from start to finish.

A sweeping saga of love and redemption. I couldn’t stop reading it.

It could not come soon enough. The end to the world she had known since she was six. An end that would begin the life she had always dreamed. Five more months of servitude. Just a short time until that new beginning.

The house on the Aventine hill swelled with noise and laughter. Livia stalled in the vestibulum, its long narrow entranceway greeting visitors with a mosaic of black points on white tile. Guests edged by while she watched in a gripping unease. The High Priestess should have brought Valeria, the sharp-witted Vestal at home among company.

A plain dove in her stola of white wool, Livia joined the purple-striped togas and women’s gowns of waxy yellow, marigold, red-orange, sky blue, sea blue, and luxury scarlet that filled the atrium. Despite the chill of the April night, she felt overly warm. Livia longed to leave this gathering of distinguished titles and put-on airs. People she did not know nor care to know. The air wrapped her in sticky wetness, sheathed her in stifling heat until she could not move, could not think, could not breathe. And she gasped, a loud sucking gasp that echoed through the room. Mortified, she pressed her back against the tiled wall to feel the cold.

To gain composure. Composure she should always show.

In her thirty years as a Vestal, Livia still had not found the inner peace to carry her through these public gatherings. Only near the sea did she experience that calm, or with Kaeso. She closed her eyes for a moment and thought of him, her dearest friend and companion, the man she would finally marry in September at the end of her service.

The smell of honey teased her nostrils. Nearby a couple lounged on a soft couch, feeding each other small pastries. The man kissed lingering crumbs from the woman’s lips, grazed his fingers down her arm. Their physical affection mesmerized Livia, yet there was no need to be so vulgar.

She turned from the spectacle and bumped a slave carrying a tray of fruit and cheese. “Your pardon, Priestess,” he apologized, his gaze lowered, before he moved on. Livia lifted the edges of the cloth that covered her hair, hoping for circulation beneath her palla, and inhaled fetid air sticky with perspiration, as sticky as her gown and tunica beneath. How she wished for a cup of water to quench her thirst, but there was only wine and bitter ale. Be calm, she told herself. The evening would soon end. She would pay her regards to her host, wherever he might be, find Horatia, and excuse herself.

A large black Laconian hound bounded her way, screeched to a halt, and sniffed her crotch. Laughing for the first time that night, Livia pushed away his nose, then stooped to pet him.

The voice belonged to a man of casual grace who strode toward her as if he belonged there. The yellow tips of his hair sparked a sense of familiarity though she had never seen him before.

The dog licked her cheek, her jaw, across her lips. She laughed again and wiped her mouth with the edge of her palla. The fur was soft beneath her fingers, its silky thickness reminding her of a cashmere yarn she had once felt as a child.

“Achilles, sit.” The dog barked, then danced around the man with obvious joy. “Forgive him. He has no manners.”

The intensity of the man’s gaze surprised her. Did she know him? “There is nothing to forgive. Receiving love is always a pleasure.” She swept her fingers once more through the thick fur. When she tried to rise, his hand circled her arm and held her in place. With his free hand, he stroked a thin curved line just below her wrist.

“I once kissed that mark.”