The Heart of Everything

Order your e-book on Amazon 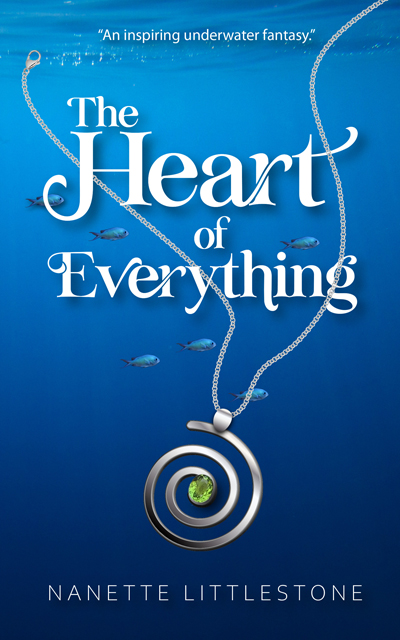 A girl with a failing heart. An ocean community in danger. An unknown energy that brings them together to heal.

To Rigel, an introverted eighteen-year-old, math and astronomy aren’t just her favorite subjects. They’re stepping stones to her dream of being an astronaut. But they can’t help her when a rare disease thrusts her heart into system failure. When her doctor recommends a Florida specialist who uses dolphin therapy, Rigel balks. She’s terrified of water. But before treatment gets underway, she chases her favorite necklace into the ocean, where a mysterious wormhole transports her to a secret underwater community.

Unlike home, this beautiful, bizarre new world houses a misty-eyed young man, a weakening energy, and an ancient prophecy. The only way for Rigel to survive, and heal her heart, is to connect with her feelings—something as frightening to her as the surrounding water.

Hebrew and sacred geometry take the reader on a mystical adventure in this inspiring underwater fantasy. Fans of The Sun Is Also a Star and The Ten Thousand Doors of January will love this heartwarming romantic story of learning to trust and forgiving the past to find a new and exciting future.

This entrancing story makes breathing underwater believable, makes a reach for the stars seem attainable, and restores our hopefulness for the future.

The Heart of Everything is a delight and a special read for young adults . . . and even the more mature among us who are still likely to dream!

The pictures the author painted with her words left me breathless at times. I felt as though I was walking through this book with the characters.

The Heart of Everything will allow your belief in magic to resurface. Hold on to it as you devour this book.

There is logic in all things, even death. But that doesn’t mean I’m ready to face it. Not yet.

Today was supposed to be happy and bright, the color of sunshine and blue sky. Not just because of my birthday but because today I’m an adult. Legally.

Instead, I’m sitting in the doctor’s office at four in the afternoon where the only color surrounding me is a dull white, and I’m waiting for news—my test results. With my NASA internship starting next week at the Jet Propulsion Laboratory, I wanted to make sure I’m fine. Better than fine. I’ve always been healthy, have great stamina, rarely get sick. Except this thing with my heart lately . . . the crazy beats and being out of breath. I didn’t even tell Shelley and Philip I was coming here. My parents. I’ve been calling them by their first names for as long as I can remember because it made more sense. The idea of a dad and a not-mom never felt right. This way there’s no separation between father and stepmother, between biology and parenting. Besides, Shelley would smother me with hand-holding and sympathetic gazes and monitor my every move, and Philip would argue empirical evidence until he and the staff were exhausted.

The cold air makes me shiver and I cross my arms over my chest. There’s an explanation for all this heart weirdness. There always is, because everything is logical. Were it not for order and organization, Earth would spin out of control and we’d all be flung into outer space.

Bach’s Prelude in C Major plays on my headphones, pure mathematical progressions that have always served to temper erratic thoughts, to calm frustration and bring me back to harmonic resonance.

Except for today. My heart gallops and careens like a drunken race horse, apparently in violent disagreement, then all is calm. Moments later it’s wild and crazy again. No matter what I try—deep breathing, imagining myself gliding through space, solving random math equations to distract my mind—my heart doesn’t listen.

I knock on my chest to get its attention. “Stop that. You’re driving me nuts.” But nothing changes. So I soften my tone. “Look, you have to cooperate. I can’t have you ruin my whole career.”

I kick my legs beneath the table and rub my arms. It’s freezing in here. Why are doctor’s offices always so cold? And where is he?

“Hurry up!” I say to the empty room. “I have places to do and things to be.” My lips quirk at the little joke but my heart doesn’t join in.

For reassurance I stroke my necklace. A thin silver spiral with a green tourmaline stone in the center.

According to Philip, life is a puzzle waiting to be solved and there is nothing that can’t be solved with mathematics. One of the first things I learned was the special property of the golden spiral. He’s right about math. Numbers have existed since the dawn of civilization, in Ancient Egypt, in Assyria, in Babylonia, where they used arithmetic, algebra, and geometry for commerce and trade. And astronomy (my favorite topic). When I was little, Philip and I would stand in the backyard under the panoply of night and gaze at the stars, millions of pinpricks dotting the blackboard of heaven, and he would point out the bright ones and make me repeat their names. Sirius, Canopus, Alpha Centauri, Arcturus. And Rigel, the seventh brightest star in the night sky, the one I’m named for.

Because of Philip I’m going to be an astronaut. It doesn’t hurt that he used to be an astronomy professor at the University of Montana. Having a dad with all that knowledge and expertise was amazing. Not to mention the perks of visiting the school’s planetarium and observatory and getting a personal tour or sitting in on a class and having the professor ask his “daughter” to explain the harmonic oscillator.

At last the door opens and Ryan McAndrews walks in, revered doctor and fanatical researcher. Or Mac, as I call him, the nickname he gives to all the kids. Mid-forties with curling brown hair and glasses that make him look sexy. Not that I would ever tell him.

He’s not smiling, damn it. Far from it. He has the saddest eyes and a lip droop that reminds me of his basset hound Sadie. The last time he had that look one of his favorite patients died. I slip off my headphones and blurt, “Who died?”